Keith “KR” Raggette is an Air Force veteran after serving 27 years.  During his Air Force career, he traveled the world over, experiencing and perfecting multiple cuisines along the way.  Prior to his military career, he honed his culinary skills while working in several fast food, seafood and steakhouse restaurants, and at St. Phillip’s College Culinary School. 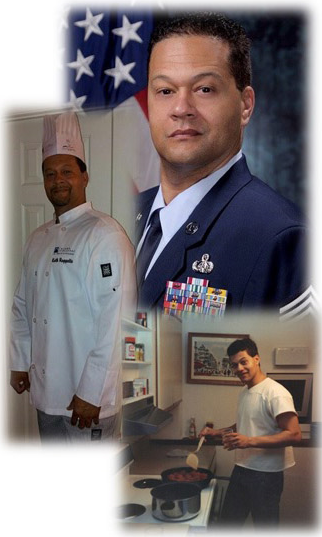 everyday as well as for special occasions and holidays.  Growing up in a Creole, Cajun, and Southern-inspired family, KR’s inspiration comes from this style of cooking.  He was always an eager pupil when his mother and grandmothers would pass on various “trade secrets” into what made their dishes different from those enjoyed by other “Southern” families.

About 40 years ago, KR became interested in Texas-style barbecue. He always had barbecue growing up, and really enjoyed watching his father BBQ ribs and chicken to perfection on an old 55-gallon barrel drum that was converted into a barbecue pit, learning the art of maintaining a constant temperature and basting the meat to maintain its moistness.

It was about 30 years ago that KR really began to master the art of “slow smoking” meats.  His first smoker was an upright smoker then he eventually “graduated” to a smoker with an offset firebox.  From this point on, KR’s “smoking skills” took off!

Over the past 30 years, KR has successfully catered small to large affairs at various festivals, for corporations, co-workers, family and friends.  Word of mouth quickly began to spread and more and more opportunities to catering events have become the norm–“Welcome to KR’s Geaux-2 Catering, LLC.”

The concept of  “Southern Gourmet on Da Geaux” mobile food trailer specializes in “on-site” catering services consisting of diverse and unique rotating menus of Texas-style Barbecue, authentic Cajun and Creole foods, Southern-inspired cuisine, and “everything in between.”